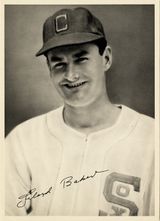 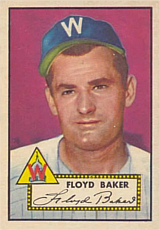 Third baseman Floyd Baker played thirteen years in the majors and was a regular for the Chicago White Sox for several years in the late 1940s.

Passing up a chance to play college football at George Washington University, Baker signed with the St. Louis Browns in 1938. He reached the majors with the Brownies in 1943 and saw limited playing time with the club over the next two seasons. Despite playing only 44 games with the 1944 American League champion Browns, he called that season "the highlight of my career." He went 0 for 2 in 2 games in the 1944 World Series. Floyd was acquired by the White Sox before the 1945 campaign. After spending most of 1946 with the Milwaukee Brewers of the American Association, he became a starter for the Sox in 1947. In 1949, he led American League third basemen in fielding, and in 1950, he hit .317 as a part-timer for the club.

When he retired, Baker held the modern day record for fewest homers (1) with at least 2,000 at-bats (in his case, 2,280). His lone home run came on May 4th, 1949, and was due to the moving in of the fences at Comiskey Park. GM Frank Lane had that idea to help Chicago's offense, but it helped the team's opponents more. The day after Baker's homer, Lane moved the fences back to their original distance. Baker's record was eventually broken by Duane Kuiper, who had one homer in 3,379 at bats.

After his playing career ended, Baker spent four years as a Minnesota Twins coach from 1961 to 1964 and from 1965 to 1995 as a Twins scout. His brother, Ray Baker, was a minor league manager and scout.