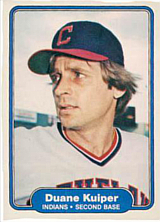 "[Nelson] Cruz waiting on [Brian] Wilson. And the right hander for the Giants throws...SWING AND A MISS! AND THAT'S IT! The Giants... for the first time in 56 years, the Giants are world champions, as they come POURING OUT OF THE DUGOUT....circling Brian Wilson! The bullpen...flying in from left-center field...dancing, hugging....and you can't help but think, that this group is celebrating....for The Say Hey Kid, for Will The Thrill, celebrating for Number 25, and celebrating for all you Giants fans, wherever you are... Giants fans...this party is just getting started!" - Kuiper's call of the San Francisco Giants winning the 2010 World Series, their first in San Francisco and first for the franchise since 1954

Duane Kuiper had a successful career as a second baseman. In his twelve years in the majors, he hit only one home run. It came August 29, 1977, off fellow future broadcaster Steve Stone.

After his playing career, Kuiper has been a longtime broadcaster for the San Francisco Giants. In addition to teaming on Giants games, Kuiper and partner Mike Krukow were the voices of the video game series MVP Baseball for EA Sports from 2003 to 2005. Duane's brother, Glen Kuiper, is an Oakland Athletics television broadcaster. He is the second cousin of Dick Bosman.