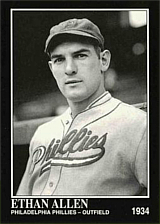 "Ethan was a close friend. He was my baseball coach for three years, who not only taught me a lot about baseball, but also about life." - George H. W. Bush

Outfielder Ethan Allen played thirteen seasons in the major leagues and hit .300, and after his playing days ended created a popular tabletop baseball game and was college coach for a future President of the United States.

After attending the University of Cincinnati, Allen was signed by the Cincinnati Reds and went straight to the majors. He became the team's regular centerfielder in 1927 and hit .295. The next season, 1928, he improved to .305, and in 1929, he led National League outfielders in fielding percentage.

Allen was traded to the New York Giants in 1930 and spent two and a half years there primarily backing up their regular outfielders, including Hall of Famer Mel Ott. After being traded to the St. Louis Cardinals following the 1932 season, he moved on to the Philadelphia Phillies in 1934 and responded by having his best big league season. He hit .330 for the Phillies with 10 homers and a career best 85 RBI and led the NL with 42 doubles. Following another .300 plus year in 1935, he was traded to the Chicago Cubs in 1936. After half a season there, he ended his career with the St. Louis Browns, for whom he hit over .300 in parts of two years.

After his playing career, Allen was the National League's motion picture director from 1939 to 1942. He then spent 23 years as baseball coach at Yale University, where his players included future President George H.W. Bush. He is credited with inventing the All-Star Baseball board game. After college, Allen also earned a master's degree in physical education at Columbia University.

His death in 1993 was widely reported at the time as having taken place in Brookings, OR, although there is some doubt about that, as his passing does not appear in the Oregon death index, but is instead in the California one, listing Del Norte County as the place of death. The issue was the object of research by SABR, who confirmed that the place was indeed Crescent City, CA.