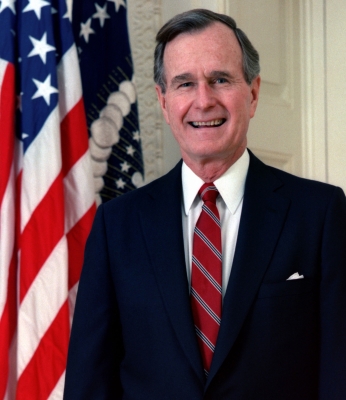 "He hit for the cycle against North Carolina and was seriously scouted." - Paul Dickson, co-author of Baseball: The Presidents' Game

"He was an excellent fielder and a tough out. . . I'd put him on my all-time opponent team . . ." - Rod Dedeaux, coach for USC, about facing opposing player George Bush in the 1948 College World Series

After two terms as the Vice President under Ronald Reagan, George Herbert Walker Bush became the 41st President of the United States, serving from 1989 to 1993. An avid sportsman, Bush was a first baseman for Yale University (where he participated in the first two editions of the College World Series, in 1947 and 1948) and often attended Houston Astros games. His son George W. Bush was a part owner of the Texas Rangers and later became the 43rd President of the United States.

Patsy Donovan was his high school coach. He served in the United States Navy in World War II as one of the youngest naval aviators in the service. Before becoming Vice-President, he had a successful business career in the oil sector in Texas, then served in Congress in the House of Representatives in the 1960s. He was later the head of the Central Intelligence Agency and United States Ambassador to the United Nations and to China.

In 1948, Babe Ruth, in his last year of life, came to visit Yale. A photo was taken of Ruth, the Yale team captain, Bush, and former Yale baseball coach Smoky Joe Wood (see below).

Bush's teammates on the 1948 Yale team included Frank Quinn and Dick Tettelbach. The USC team that Yale faced in the 1948 College World Series finals also included several future major leaguers. He was the starter at first base during all three of his years at Yale, starting every single game played by the team during those three years. He was not much of a hitter (he hit .224 with 1 homer in 76 games), but was an outstanding fielder. His coach at Yale was former major leaguer Ethan Allen.

During the games of the 2005 World Series held in Houston, Bush and his wife were present in the front row in Astros jackets. He was asked to attend the ceremonial first pitch ceremony for Game 5 of the 2017 World Series in Houston, where his son was delivering the actual pitch. 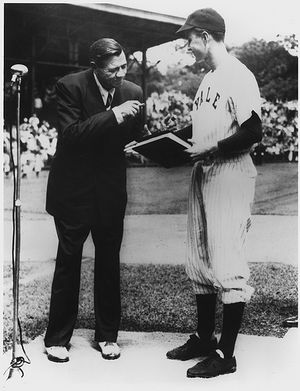 Bush and Ruth at Yale