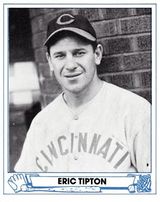 Eric Tipton played seven seasons in the majors, achieving stardom during World War II. His best year was 1943, when his Adjusted OPS+ was third in the National League. His 9 home runs in 1943 were best on the Cincinnati Reds, a team which finished second in the league. The following year, 1944, he hit .301, second highest among the regulars on the team.

He played college football as a halfback at Duke University. After his major league career, he was head baseball coach at the College of William & Mary (1953-1957) and at the United States Military Academy (1958-1977). He is a member of the College Football Hall of Fame.

He is one of two major leaguers with the last name "Tipton".