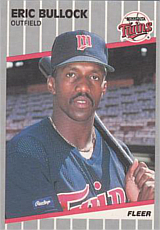 The son of minor league outfielder Eddie Bullock, Eric Bullock saw brief action with four teams in seven big league seasons. His longest tour of duty came as a pinch hitting weapon with the 1991 Montreal Expos, although he was only able to craft a .222/.305/.319 line in 73 games (72 at bats). In a rare start that season, playing left field against the Los Angeles Dodgers, he cracked a three-run homer in the 6th off Mike Hartley en route to a 3-for-4, 2 runs scored, 3 RBI day at the plate in an Expos 6-5 victory on July 12.

Following his playing days, Eric logged some time as a minor league coach.