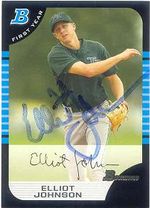 Second baseman Elliot Johnson was signed by the Tampa Bay Devil Rays and scout Craig Weissmann as an undrafted free agent in June 2002.

Johnson made hit pro debut in 2002 with the Princeton Devil Rays, batting .263 with 10 doubles and 14 stolen bases in 42 games and hitting safely in 27 of his 37 starts. He was with the Charleston RiverDogs the next summer but only hit .212 in 54 games after missing more than two months with a hamstring injury. He was back with Charleston in 2004 and hit .262 with 6 home runs and 43 stolen bases (tops in the Tampa Bay Devil Rays organization) to earn a spot on the South Atlantic League All-Star team. That year was highlighed by a 14 game hitting streak from April 14th to May 1st and homering in 4 straight at bats on May 27th and May 28th.

Johnson made the Rays Opening Day roster in 2008 and made his big league debut on April 5th against the New York Yankees, going 1 for 4 as the team's designated hitter.