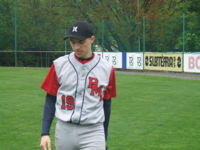 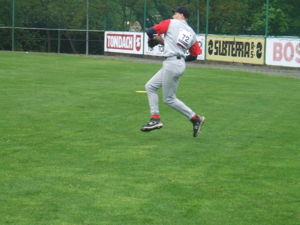 Edvardas at the 2008 MLB Academy

Edvardas Matusevičius is the son of Lithuanian baseball official and former Soviet national team member Edmundas Matusevičius. Edvardas went 0 for 14 with 6 strikeouts in the 2008 World University Championship and went 0-2 with a 7.20 ERA, second-best on the Lithuanian squad. He attended the MLB European Academy later that year. He concluded a busy year by playing for the Lithuanian squad in the 2008 European Championship Qualifiers, allowing 8 runs in 8 innings and going 0-1. Five of the runs were unearned though and he had gotten the toughest call on the Lithuanian team, facing the Croatian national team in his only game on the hill.

Edvardas attended the MLB Tryouts in Prague in March 2009, where certain players may be selected to attend the MLB Prospect Camps in Italy in July. Edvardas posted the fastest time in the 60 yard sprint, and his fastest pitch hit 86 mph on the radar.

Edvardas is also a pitcher during the regular season for Lithuanian teams. For the 2008 season, he was with the BK Vilnius team. In 2009, he played for Vilnius “Sporto Vilkai”.

Edvardas was invited to the MLB Prospect Camp in Italy in 2009, and planned to attend school in the US to further his studies. He attended Islip High School in Long Island, New York in the fall of 2009.