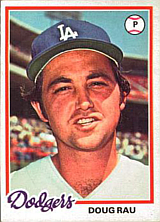 Doug Rau was a starting pitcher for the Los Angeles Dodgers for most of his nine-year career. He won 81 and lost 60, for a career .574 winning percentage.

Rau was born in Texas and attended Texas A&M University. He was a picked by the Los Angeles Dodgers in the secondary phase of the 1970 amateur draft. He was an immediate success for the Bakersfield Dodgers in the California League in 1970, going 12-2 with a 1.75 ERA. He was moved up to the AAA Spokane Indians for just one game the same summer. Back there in 1971, he went 5-5 with a 3.87 ERA, and in the same year in AA with the Albuquerque Dukes of the Texas League, he went 7-5 with a 1.69 ERA. Albuquerque became the Dodgers' AAA farm team in 1972, and his ERA went up a notch to 3.51, but his win/loss record was an impressive 14-3 and he made his major league debut that season.

The most similar contemporary pitcher to Rau, using the similarity scores method, is Ed Figueroa.

Rau hit a triple in the first at-bat of his career. Then, with echoes of Hoyt Wilhelm, he never tripled (or homered) again. It was to be 35 years before any other pitcher (Joel Hanrahan) tripled in his first career at-bat.