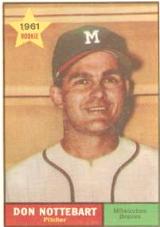 "I didn't throw a curve all night." - Don Nottebart, talking about his no-hitter, in which he relied on a sinking fastball and sliders

In Cincinnati in 1966, he was one of the veterans on a young team that featured Pete Rose, Tony Perez, Vada Pinson, and Deron Johnson.

His obituary in the Boston Globe indicates that after baseball he ran a service station and also a carpet and flooring business. Don Nottebart