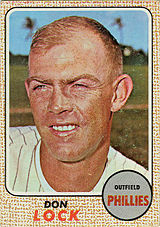 Don Lock was the regular center fielder for Washington Senators and Philadelphia Phillies teams from 1963 to 1967. In his eight-year major league career, most of his teams finished well under .500.

His lifetime major league batting average of .238 seems modest, but it was the second dead-ball era and averages were low all over. Because he drew walks well and had some power, he was actually an above-average hitter. He was in the top ten in homers in the league twice while with the Washington Senators but also finished second in the league in strikeouts during those years. On July 2, 1966, Frank Howard, he, and Ken McMullen hit successive homers with two outs in the 6th inning.

He is the only major leaguer (through 2007) with the last name Lock, although there have been several named Locke.

Lock was originally signed by the New York Yankees, and Tales from the Yankee Dugout has a page on him, although Lock never appeared in a major league game with the Yankees. Humorously reacting during spring training to the possibility that the Yankees would cut him, he crossed off his name from his locker, barricaded himself inside, and "fired" at anyone who approached with his bat.

In 1959 he played with the Greensboro Yankees along with Tom Tresh. In 1960 he led the Eastern League in home runs with 35 and RBI with 117 while playing with the Binghamton Triplets.

He had played baseball and basketball while at Wichita State University, earning all-conference in baseball in 1956 and 1957. He was inducted into the Kansas Baseball Hall of Fame in 1974.

He managed three minor league teams between 1971 and 1973, with a total won-loss record of 162-199. His stops were with the Winston-Salem Red Sox, the Pawtucket Red Sox, and the Wilson Pennants.

He is mentioned briefly in the books Baseball in Wichita and The Washington Senators, 1901-71. Don Zimmer also mentions him as "one of the good young players" on the Senators in Zim: A Baseball Life.