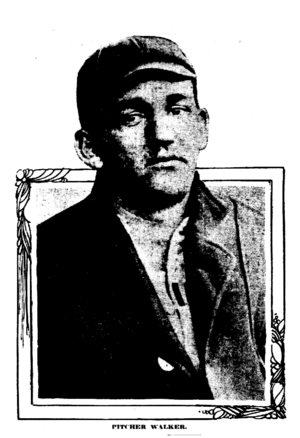 Ewart "Dixie" Walker pitched four seasons for the Washington Senators. He was a year older than teammate Walter Johnson and was his roommate.

After his major league days he played for many more years in the minors. He was the top winner on the 1913-14 St. Paul team and won 25 games split among two teams in 1916.

He was the brother of Ernie Walker and father of "Harry the Hat" Walker and Fred "Dixie" Walker. Until the Hairstons arrived, the Walkers were the only set of major-leaguers to have two generations in a row of brothers. He is the only father of two major-league batting champions. Source: "Great Baseball Feats, Facts & Firsts" by David Nemec

"Born of baseball royalty, (Harry) "The Hat" (Walker) seldom drew mention without qualification. He was either the son of the old Washington pitcher, Dixie Walker; the nephew of the St. Louis Browns outfielder, Ernie Walker, or the kid brother of Fred (Dixie) Walker, the pride of Flatbush. " - from a Baseball Digest article in August 1955 about Harry Walker