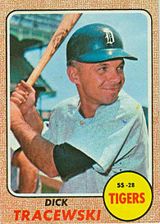 A very poor hitter and a slick fielder, Dick "Trixie" Tracewski survived 8 major league seasons. After retiring, he managed the Lakeland Tigers in 1970 and the Montgomery Rebels in 1971. He then returned to the Detroit Tigers as a coach for the next 24 years, managing two games in 1979 in an interim capacity.

Tracewski signed with the Brooklyn Dodgers in 1953, but did not make his major league debut until 1962, by which time the team had moved to Los Angeles, missing the 1958-1959 seasons due to military service. Playing for the Pueblo Dodgers in 1957, Tracewski led the Class A Western League with 14 triples.