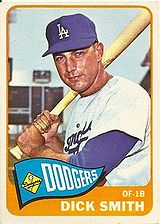 Dick Smith played three seasons in the big leagues, appearing in 76 games. He didn't hit a home run, but he had two triples and stole 9 bases. Along with pinch-hitting (16 games) and pinch-running (18 games) he played 20 games at each of 1B and LF with lesser numbers of games in CF and RF.

After the 1964 season, he was traded back to the Dodgers, and played 10 more games in the big leagues with the 1965 Dodgers. For most of 1965 and all of 1966 he played for the Dodgers' farm club in Spokane, the Spokane Indians. In early April 1967, he was traded to the Minnesota Twins organization and spent the year with their Denver Bears farm club. In 1968 he was in the Washington Senators organization, playing for the Savannah Senators at age 29.