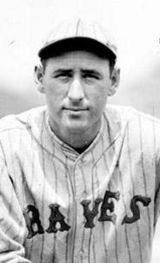 Dick Burrus, known also as Maurice Burrus in his minor league days and non-baseball life, is best noted for his 1925 season, when he hit .340 with 41 doubles at age 27 for the Boston Braves managed by Dave Bancroft. He had broken into the majors at age 21 with the 1919 Philadelphia Athletics, but after 1919 and 1920 with them, he was out of the majors till 1925. He was primarily a first baseman, but he later said his fielding was "rotten" in those early days with the Athletics.

Burrus was born in Hatteras, NC, on an island off the coast of North Carolina. He went to Elizabeth City High School, where he was a pitcher and occasional catcher. He later spent time at Oak Ridge Preparatory School and Furman University. He was a three-sport star at NC State in 1919, the year he came up to the majors. His college major was textile engineering. He spent two years in the army, which interrupted his college education. In the summer of 1919, he spent time in the South Atlantic League, hitting .390. In between 1920 and 1925, he spent time in the minors, first with Columbus of the American Association and then with Atlanta of the Southern Association. It is said he developed a hernia shortly after his 1925 season and never was as good a player after that. He later played in the minors at Indianapolis, Houston, and Atlanta.

After his playing days he was a Texaco distributor, a fish buyer, and a county commissioner. During World War II, he was part of a delegation of citizens from Hatteras who lobbied the governor for a road from the mainland to the island. He brought some shad for the governor. His daughters wrote romance novels under the pseudonym Bronewyn Williams. Their books focused on life on the Outer Banks. There is a Maurice Burrus Road in Buxton, NC, a few miles away from Hatteras.