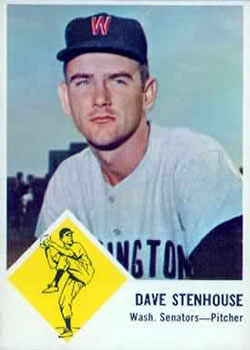 Dave spent years first in the minors. He was signed by the Chicago Cubs in 1955 and pitched briefly that year. He worked his way up the Cubs chain, having some big successes - he was 16-4 with the Lafayette Oilers in 1956 and 16-8 with the Pueblo Bruins in 1958, both times in partial seasons.

After the 1958 season he was drafted from the Cubs by the Cincinnati Reds and spent 1959 to 1961 in their organization, winning in double figures each year. After a 14-12 season with the Jersey City Jerseys in 1961, he was traded to the Senators.

Stenhouse became the workhouse of the 1962 Senators' starting staff, starting the most games, pitching the most innings, and getting the most wins. During the next two seasons, though, he had injury problems and was less effective.

Dave coached Brown University from 1981 to 1990. Previous to that he coached at Rhode Island College.

He and Angelo Dagres are (through 2008) the only two major league players out of the University of Rhode Island. They were both there from 1953 to 1955.

He is not to be confused with Don Stanhouse, another pitcher with a similar name.