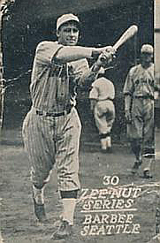 Dave Barbee was in the majors with the 1926 Philadelphia Athletics and the 1932 Pittsburgh Pirates. Born in Greensboro, NC, he attended college at Oglethorpe University in Georgia from 1924-26, a few years before Luke Appling went there. Barbee had already started playing pro ball in 1925-1926 with the Greensboro Patriots, hitting well over .300, and made his major league debut in July 1926. Dave was in 19 games for the 1926 Athletics, and all of his appearances were in left field. The regular in left field that season was Bill Lamar, who would continue to play there the following season. The youngest player on the A's was 18-year-old Jimmie Foxx, already in his second year with the team.

Barbee spent 1927-1931 in the minors. In 1927 he was with Reading and then from 1928-1931 he played in the PCL for Seattle, Portland and Hollywood, hitting at least .316 each year. In both 1930 and 1931 he had over 40 home runs. With Hollywood, the only other player on the team able to hit half as many home runs was Mickey Heath. Showing such offensive ability, Dave was able to get another year in the majors. With the 1932 Pirates, he appeared in 97 games and had 327 at bats as the fourth outfielder. In reality, he was in left field more often than Adam Comorosky, but Comorosky had more games total in the outfield so he is listed as the third outfielder. The other regulars in the outfield were the Hall of Fame brothers Paul and Lloyd Waner. The 1932 Pirates hit .285 as a team while Barbee hit .257. He did hit 5 homers (best on the team was 8).

The 1933 season found him playing for the Pirates' affiliate in Tulsa and the Detroit Tigers' affiliate in Toronto. In 1934, he was with Birmingham and Minneapolis while in 1935 he was with Atlanta. The book Baseball: The People's Game states that Barbee was one of the major leaguers produced by Southern textile teams. He did play for an industrial team called Tower in 1937 (he was also manager), according to the October 15, 1937 issue of the Auburn Citizen-Advertiser. Five years later, he played for Burlington in the minors. The book The Ferrell Brothers of Baseball states that Barbee played in the local County League finals in Greensboro in 1926, at a time when he had already been in the majors.