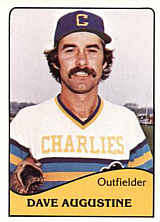 Dave Augustine played for the Pittsburgh Pirates in 1973 and 1974. An outfielder, his most common position was center field.

Augustine was born in Follansbee, WV, not far from Pittsburgh. Although drafted by the Cleveland Indians in 1968, he signed as a free agent with the Pirates in 1969. Dave played 15 seasons in the minors, mostly as an outfielder but also playing significant numbers of games at third base and shortstop, as well as pitching in three games. He hit .300+ a couple of times, once with Gastonia in 1970 and once with Sherbrooke in 1972. Most of his minor league career was spent in the Pirates organization, but he also played for teams in the organizations of the Houston Astros, Kansas City Royals and Texas Rangers.

It was not easy to find a spot in the Pirates' outfield, since the positions were filled in 1973-1974 by Willie Stargell, Richie Zisk and Al Oliver. The young Dave Parker was also trying to find playing time. On September 20, 1973, Dave hit what might have been a key home run to win a game against the New York Mets but the umpire ruled it a double. The Mets went on to win the game and the pennant that year. The Mets finished with 82 wins, the Cards with 81, the Pirates with 80 and the Expos with 79.

He is apparently not related to Jerry Augustine, a player with the same last name who came up in 1975.