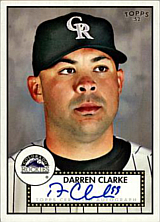 Pitcher Darren Clarke was drafted by the Colorado Rockies as a draft-and-follow pick in the 35th round of the 2000 amateur draft. After another year of junior college, he was signed by scout John Cedarburg and made his pro debut in 2001. His big league career consisted of a scoreless 1 1/3 innings (2 games) with the Rockies in 2007.