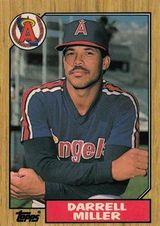 Miller was a multi-position player, appearing in 97 games at catcher, 95 at various spots in the outfield, 16 at first base, 8 at DH and 2 at third base.

He also played 11 years in the minors, including five with the Edmonton Trappers (where he hit over .300 during four of the five seasons).

He was signed as a 9th round pick in the 1979 amateur draft by the California Angels and scout Lou Cohenour. He came out of California State Polytechnic University-Pomona where he attended at the same time as pitcher Alan Fowlkes.

Miller is the older brother of Basketball Hall of Famer Cheryl Miller and former NBA player Reggie Miller. He now heads Major League Baseball's "Urban Youth Academy" in Compton, CA and holds the title of Major League Baseball Vice-President of Youth and Facility Development. The Academy provides coaching and training facilities for high schoolers who have graduated from the "Reviving Baseball in Inner Cities" program, and orients them towards attending college or making a career in organized baseball. Trayvon Robinson and Efren Navarro were the first two graduates of the Academy to reach the major leagues, in 2011.

Miller's son Darrell Miller Jr., also a catcher, was a top high school player and was selected by the Philadelphia Phillies in the 34th round of the 2012 amateur draft. Miller Jr. went to UCLA and signed with the Kansas City Royals as an undrafted free agent in 2017 [1].