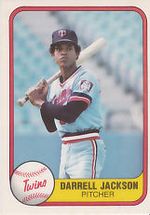 Darrell Jackson pitched a no-hitter in his professional debut on April 14, 1978. He threw nine innings of no-hit ball for the Orlando Twins of the class AA Southern League, walking seven and fanning five. He was taken out with a 0-0 tie in the 10th in favor of Jeff Holly. Orlando beat the Jacksonville Suns, 1-0. Jackson was 4-3 with a 1.80 ERA for Orlando and was promoted to the majors with the Minnesota Twins by mid-season.