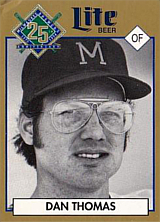 "No one was more haunted than Danny Thomas." - John Blanchette, Spokane Spokesman-Review

Danny Thomas showed considerable promise as a young ballplayer with the Milwaukee Brewers but he also displayed mental health issues from nearly the time he arrived in the big leagues. A member of the Worldwide Church of God, Thomas practiced strict observance of the Sabbath, refusing to suit up from sundown Friday to sundown Saturday. In 1977, he was demoted to Triple A, despite a .271 average, and took a pay cut for his refusal to play Saturday games in Triple A. He was eventually demoted to Double A, a demotion he refused, and played on the periphery of organized ball in 1978 and 1979.

Life did not go well for him after leaving baseball. He died tragically, hanging himself in his jail cell after being charged with the rape of a 12-year-old girl.