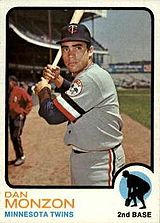 Infielder Danny Monzon was a utility player who spent two years with the Minnesota Twins in 1972 and 1973. He had a good batting eye judging from his walk rate but also displayed limited power. Relegated to many pinch hitting and pinch running appearances, with some infield games mixed in, Monzon concluded his major league stay with a .244/.342/.275 split covering 94 games and 154 plate appearances. He continued playing but at the AAA level for 4 more seasons (1974-1977). Monzon managed in the New York Mets chain from 1978 to 1982. He scouted for the Mets from 1983 until 1986. He was then a scouting supervisor and national cross checker for the Chicago White Sox (1987-?) and Chicago Cubs (?-1994). Monzon died in an automobile accident at age 49. At the time of his death, Monzon was the Boston Red Sox Latin American scouting coordinator.