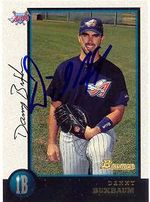 Infielder Danny Buxbaum played in the minors from 1995 to 1998. He was taken by the California Angels in the 11th round of the 1995 amateur draft.

After not playing ball for over a decade, he appeared in a game for the independent Long Beach Armada. The starting pitcher, he went 2/3 of an inning, allowing six walks, two hits and six earned runs.