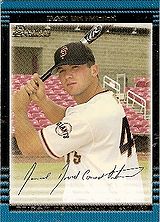 Dan Ortmeier was drafted by the San Francisco Giants in the 3rd round of the 2002 amateur draft. He was signed by scout Todd Thomas and made his pro debut that summer.

In his 2005 AA campaign, outfielder Ortmeier hit 20 home runs with 35 stolen bases, before being called up to finish the year in the Majors with the San Francisco Giants.

He started 2006 with the AAA Fresno Grizzlies. He was called up briefly to the Giants and then retured to triple A. He stuggled with a knee and a wrist injury and finished the year with the AA Connecticut Defenders.

Dan had knee surgery in the off-season and returned to good health. He was on the Giants 40-man roster and participated in spring training with the team in 2007 but was assigned to the Grizzlies for the start of the season.

Ortmeier stopped switch-hitting during spring-training of 2008 and began taking virtually all of his at-bats right-handed.