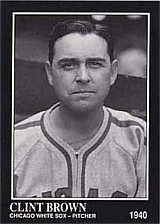 Primarily a starter in eight seasons with the Cleveland Indians, pitcher Clint Brown became one of the best relievers in baseball after being acquired by the Chicago White Sox at the start of the 1936 campaign. He led the American League with 18 saves and 53 appearances the following year before being slowed by an arm injury in 1938. He bounced back in 1939, making 61 appearances out of the pen (breaking a record of 58 set by Garland Braxton of the 1927 Washington Senators). Prior to the 1941 season, he was traded back to the Indians, with whom he spent his last two big league seasons.