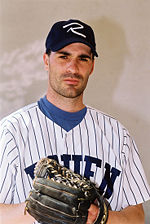 Christian Chénard is a Quebec-born pitcher who has played for several teams in Quebec and France.

He is a distant relative of Georges Maranda (a major league pitcher in the 1960s); Christian's father and Georges were cousins.

Baseball on both sides of the Atlantic[edit]

Christian started playing baseball in the Junior Elite du Quebec league, playing for the Ambassadeurs de la Rive-Sud and the Diamants de Québec from 1993-1995. He attented the Canadian Baseball Academy from 1994-1995 (and also in 2001).

Crossing the Atlantic yet again, he was a player for the Rouen Huskies from 2003-2004. He played on the 2003 French Championship team, and helped Rouen at the 2004 European Cup.

In 2006, he started a new career as coach of the pitching staff and assistant coach for a high school baseball development program in Quebec City (the "Programme Sport-Etudes" of Cardinal-Roy Pointe-Lévy high school). He was still employed at the school in a coaching position as of 2009.

In 2007, he was the head coach of the midget AAA Condors de Charlesbourg (Quebec), who finished in 4th place in the Canadian championship, and who won the gold medal in the Quebec provincial championship. In 2008, he was the pitching coach for the Diamants de Quebec of the junior LBEQ league, and was the supervisor for all pitchers in the midget AAA division, Quebec region.

He coached for France in the 2012 European Championship and for Canada in the 2014 Women's Baseball World Cup and for the Canadian women's squad that won Silver at the 2015 Pan American Games.

Christian was married in Quebec City in July 2009; his wife's name is Nancy.

source: translated from http://fr.wikipedia.org/wiki/Christian_Chénard, see the Wikipedia article for sources used in the creation of that article. Some of their errors have been corrected but perhaps not all. More reliable sources than Wikipedia include the *SABR Minor League Database