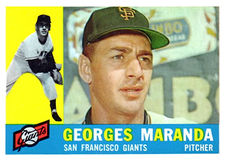 Georges Maranda was the only baseball player from the Quebec City region to have played in the Majors until catcher Max St. Pierre made his debut in 2010; he was born in Lévis, QC, across the St. Lawrence River form Quebec City. He played minor league baseball in Lévis, before moving to the Braves de Québec, an amateur team. While playing with Quebec, he was discovered by scouts from the Milwaukee Braves, and was signed at the same time as Claude Raymond and Ron Piché. He played with the San Francisco Giants for the first time on April 26, 1960. He stayed with the Giants for two years, then moved to the Minnesota Twins.

In 1973, the town of Lévis named its baseball park the "Stade Georges Maranda" (Georges Maranda Stadium). He was inducted into the Quebec Baseball Hall of Fame on June 26, 2000.