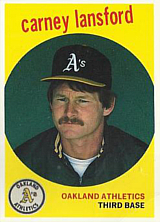 Third baseman Carney Lansford played fifteen years in the majors, winning a batting title, hitting over .300 five times, and getting over 2,000 hits. After his playing days, he was a big league coach for several teams.

Lansford played for Santa Clara, CA in the 1969 Little League World Series. Batting leadoff and playing right field, he went 1 for 3 in a 5-0 loss to Taipei in the finale.

The brother of professional players Jody Lansford and Phil Lansford, Carney had the most successful baseball career in his family. He was selected by the California Angels in the third round of the 1975 amateur draft and reached the majors in 1978 as the team's regular third baseman. He ended the year with a .294 average and finished third in 1978 American League Rookie of the Year Award voting. The next summer, in 1979, he hit .287 with a career-best 30 doubles and 19 home runs as the Angels reached the ALCS for the first time in franchise history.

Dealt to the Boston Red Sox following the 1980 campaign, Lansford hit .336 while striking out just 28 times in 1981 and won the American League batting crown. He hit .301 in 1982, but following the season was traded to the Oakland Athletics for Tony Armas. He hit at least 10 homers in each of his first five years with the A's, but his batting average dropped until 1989, when he hit .336, second in the AL behind Kirby Puckett. He also stole a career-high 37 bases that year. With the A's, he appeared in the World Series in 1988, 1989, and 1990. After missing most of 1991 with an injury, he returned to Oakland for one last year in the majors in 1992.

The most similar players to Lansford, according to the similarity scores method, are Bill Madlock and Terry Pendleton.

After his playing career ended, Lansford spent time on the coaching staff of Tony LaRussa with the Oakland Athletics in 1994 and 1995, and St. Louis Cardinals in 1997 and 1998. He was the hitting coach for the San Francisco Giants in 2008 and 2009. He moved to the Toronto Blue Jays for one season in 2010, and then to the Colorado Rockies in 2011. He was hitting coach of the Lamigo Monkeys when they won the 2015 Taiwan Series; his son, Jared, pitched for them.

Away from the diamond, he played the role of Chicago White Sox slugger Kit 'Hit or Die' Kesey in the movie Angels in the Outfield.

Lansford's son, Jared Lansford, has pitched in the minors and Taiwan. Another son, Josh Lansford, was a third baseman in the Chicago Cubs system until moving to the A's organization and converting to pitching. He is a direct descendant of Sir Francis Blake.