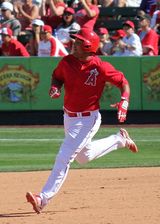 Catcher Carlos Perez signed with the Toronto Blue Jays in 2008. Aged 17, he played for the DSL Blue Jays 1 that year, hitting .306/.459/.378 with 52 walks in 58 games. He was third in the Dominican Summer League in walks and 6th in OBP and was named team MVP. That earned him a ticket to the United States the next year, when he played 43 games for the GCL Blue Jays. He hit .291/.364/.433 with his first professional homer and threw out 49% of attempted base-stealers. He was named team MVP and Baseball America ranked him as the 5th-best Gulf Coast League prospect, between Jarred Cosart and Adrian Salcedo. He was recognized by the GCL as the league's All-Star catcher.

2010 saw him playing with the Auburn Doubledays of the New York-Penn League; in 66 games, he bit .298/.396/.438 with 11 doubles, 8 triples, 44 runs and 41 RBI. He had 13 passed balls behind the plate. He was named team MVP, the 4th Blue Jay farmhand to win three R. Howard Webster Awards; the others were Carlos Delgado, Adam Lind and a Lopez. He tied for third in the NYPL in three-baggers. Baseball America named him the league's top prospect, the same year another Carlos Perez won the award in the Appalachian League.

In 2011, he moved up to the Lansing Lugnuts, where his average fell to .256/.320/.355 in 95 games. He drew 37 walks, fewer than he had drawn in much less time his first pro campaign, and made 14 errors and 18 passed balls. He only threw out 29% of attempted base-stealers, his third straight season of decline. He made his winter league debut, appearing in two games for the Leones del Caracas but not batting.

Carlos returned to Lansing for the start of the 2012 season, improving to .275/.358/.447 in 71 games, with 35 walks, 22 doubles, 5 triples and 5 homers. On July 20th, he was traded to the Houston Astros as part of a 10-player blockbuster deal, joining Joe Musgrove, Francisco Cordero, Asher Wojciechowski, Ben Francisco, David Rollins and a player to be named later in exchange for J.A. Happ, Brandon Lyon and David Carpenter.

On November 5, 2014, he was traded to the Los Angeles Angels of Anaheim along with Nick Tropeano in return for Hank Conger.In his major league debut with the Angels on May 5, 2015. He went 2 for 4 as the starting catcher against the Seattle Mariners and hit his first career homer off Dominic Leone, a walk-off shot in the 9th inning that gave the Angels a 5-4 win. This strong debut was a precursor to a his overtaking veteran Chris Iannetta as the Angels' primary catcher, as he played 86 games the rest of the way, hitting .260 with 4 homers and 21 RBIs. Iannetta left as a free agent after the season, and the Angels replaced him with Geovany Soto, whose role was slated to be as the back-up with Perez getting the starting nod.

Carlos and C.J. Cron formed a two-men wrecking crew when the Angels demolished the Boston Red Sox, 21-2, on July 2, 2016. Carlos went 5 for 6 with a homer and 6 RBIs while Cron was 6 for 6, with two homers and 5 RBIs. They were the first pair of teammates to have at least 5 hits and RBIs each since Gene Moore and Buck Jordan had done so for the 1936 Boston Bees. He played 87 games that season, hitting .209 with 5 homers and 31 RBIs. In 2017, however, he was limited to 11 games at the major league level, going 2 for 20, although one of his two hits was a long ball.

On March 31, 2018, he was traded to the Atlanta Braves in return for infielder Ryan Schimpf. The Braves were in a crunch at the time, as their two regular cacthers, Tyler Flowers and Kurt Suzuki were simultaneously on the disabled list, leaving Chris Stewart as the only catcher in the organization with major league experience.