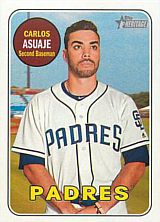 Infielder Carlos Asuaje was born in Venezuela but went to school in the United States and was drafted in the 11th round of the 2013 amateur draft by the Boston Red Sox out of Nova Southeastern University; the scout was Willie Romay. He made his professional debut in 2013 with the Lowell Spinners of the New York-Penn League where he hit .269/.366/.368 in 52 games while playing second and third base. In 2014, he played 129 games between the Greenville Drive of the South Atlantic League and the Salem Red Sox of the Carolina League. His batting line was an excellent .310/.393/.533 with 86 runs scored and 101 runs driven in. He slugged 38 doubles, 12 triples and 15 homers. In 2015, he spent the entire season with the Portland Sea Dogs of the Eastern League, playing 131 games. He batted .251/.334/.374 with 60 runs and 61 RBI as the team's starting second baseman.

On November 13, 2015, he was traded to the San Diego Padres, along with fellow prospects Logan Allen, Javy Guerra and Manuel Margot, in return for closer Craig Kimbrel. When he made his major league debut with the Padres on September 21, 2016, he was the third graduate of St. Thomas Aquinas High School in Fort Lauderdale, FL to do so in less than a month, preceded by Stephen Cardullo and Robby Scott. He got his first hit on September 23rd, a 1st-inning double off Albert Suarez of the San Francisco Giants, and went 5 for 24 (.208) during that first cup of coffee.

Carlos saw more extensive playing time in the majors in 2017 and 2018, with 89 and 79 games respectively. The first of these two seasons was quite promising, as he hit .270 with 4 homers and 21 RBI. The Padres were counting on him to be their everyday second baseman the following year, but he failed completely, hitting just .196 with 2 homers and 19 RBI for an OPS+ of 59; Jose Pirela eventually claimed the starting job. He was placed on waivers in December 2018 and on the 10th was claimed by the Texas Rangers. Nine days later, he was sold to the Lotte Giants of the KBO. He was released June 9, 2019, after batting .252 with 2 home runs and 21 RBI and returned to the States, signing a minor league deal with the Arizona Diamondbacks. In January 2020, he caught on with a minors pact with the Chicago Cubs.