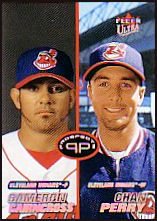 Cam Cairncross had one season as a major leaguer in 2000 with the Cleveland Indians. He pitched 15 games with a 3.86 ERA. It was the culmination of an excellent 2000 season, as he had pitched 28 games for Akron in the Eastern League with an ERA of 1.52, and 15 games for Buffalo in the International League with an ERA of 2.25. However, he was 28, and it was his last season in US professional ball. He had been named to the Australian Olympic baseball team, but chose to pitch in the majors instead.

Cam was born in Australia, and began his US career in the San Diego Padres organization at age 25, pitching to a 5.63 ERA in A ball in Rancho Cucamonga in 1997. He had missed the previous two seasons as a result of elbow surgery. He was out of U.S. professional ball in 1998, pitching instead in Australia. In 1999, he split his time between Kinston and Buffalo, both in the Indians organization. His ERA of 0.00 in 6 games was good enough at Kinston, and at Buffalo he had an ERA of 5.21. In the 1999 Intercontinental Cup, he struck out 8 in 5 2/3 scoreless innings to help Australia win its first Gold in a major international competition. He was to improve that notably the next year in 2000. He missed the entire 2001 season due to ligament injuries, then missed most of 2002 as well.

On January 2, 1995, Cairncross completed a no-hitter started by Gary Nilsson and Kelly Wunsch in an Australian Baseball League game.