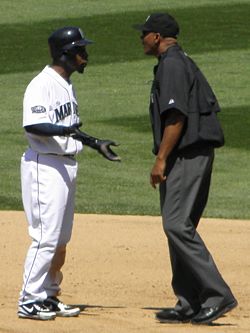 C.B. Bucknor has been a major league umpire since 1996, when he was part of the National League staff. He was voted three times the major leagues' worst umpire in a poll of players conducted by ESPN - in 2003, 2006 and 2010. [1]. While not designated a crew chief, he has served in the position on an interim basis during absences of Jeff Nelson.

He has had relatively few prestigious assignments for an umpire with his lengthy tenure, with two All-Star Games (in 2005 and 2021), a number of Wild Card Games/Wild Card Series and Division series, but not League Championship Series or World Series.

On June 4, 2022, he was the first umpire to have to invoke the rule preventing position players from pitching in games other than blow-out games with a difference of six runs or more. Los Angeles Dodgers manager tried to use Zach McKinstry as his pitcher in the 9th inning with his team trailing the New York Mets, 9-4, and Bucknor objected, forcing him - after MLB Headquarters in New York were consulted to confirm h8s ruling when Roberts objected - to use regular pitcher Evan Phillips instead. The rule had been adopted before the 2020 season but put on hold for two years, amond very changes caused by the Coronavirus pandemic.