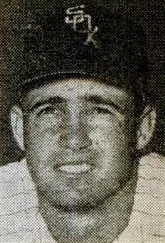 Brian McCall made his baseball debut at age 18 with the Idaho Falls Russets in 1961, hitting .295. In 1962, he made four stops in the Chicago White Sox chain, batting .213 for the Savannah White Sox, .323 for the Greensboro Yankees and .303 for the Tri-City Braves (where he spent most of the year). He hit 14 homers and drove in 75 runs in his minor league appearances, then joined the White Sox late in the year, going an impressive 3 for 8 with two home runs. He hit both homers on September 30, 1962 against the New York Yankees. He led off the game and played center field. The home runs were hit off Bill Stafford and Ralph Terry.

He enrolled in the California College of Arts and became a professional artist. He was once named Virginia Artist of the Year. Working primarily as an illustrator and animator for most of his career, he married in 1986 and moved to Greensburg, PA in 1993, purchasing a former church and converting it into his home and studio.

McCall then began working in polystyrene foam, enabling him to work more on sculptures. He became popular in the area for his unique three-dimensional store signs.