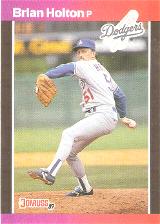 As a member of the Albuquerque Dukes, Brian Holton got the start against the Los Angeles Dodgers in an exhibition game in 1981. To everyone's surprise, the Dukes beat the Dodgers, who would go on to win the World Series that year. Still, he did not get to make his major league debut with the Dodgers until 1985, by which time he was 25 years old. He was a member of the Dodgers World Series-winning team in 1988. he had his best season as a long reliever that year, putting up an ERA of 1.70 in 84 2/3 innings, to go along with a 7-3 record.

After the season was one of three players traded to the Baltimore Orioles in return for future Hall of Famer Eddie Murray.