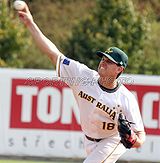 Brad Tippett was a pitcher in the Minnesota Twins system.

Tippett pitched for Australia in the 2003 World Youth Championship. He was signed by scout Howard Norsetter for the Minnesota Twins shortly before his 18th birthday. Tippett debuted as a pro with the GCL Twins in 2006, going 3-5 with 10 saves and a 2.53 ERA; the big negative was a .303 opponent batting average. Despite playing on a sub-.500 team, Brad managed to lead the Gulf Coast League in saves. He played in the 2006 World Junior Championship.

Tippett was excellent in 2007. He was 7-1 with 3 saves and a 0.93 ERA in 21 games for the Elizabethton Twins, helping them to an Appalachian League title. He only allowed 20 hits and 4 walks in 38 2/3 innings while striking out 51 hitters. Opponents hit just .155 and no left-handed hitter reached safely all season (in 36 AB). Tippett was tied for second in the Appy League in wins even though he was solely out of the bullpen. Baseball America ranked him as the league's #18 prospect; he wasn't even the highest-rated Elizabethton middle reliever as Loek van Mil was chosen at #14.

Tippett made his Claxton Shield debut in 2008, throwing three hitless, scoreless innings with one walk and five strikeouts. He was added to the Australian national team for the 2008 Final Olympic Qualification Tournament. He was 1-0 with a 4.50 ERA in that event, during which Australia failed to earn a spot in the 2008 Olympics. He threw three scoreless innings as the only good Australia pitcher in a 13-11 win over South Africa, earning him the win. In a 10-5 win over Team Canada, Tippett hit two batters in a row (Adam Stern and Stubby Clapp) to load the bases after an error but got Mike Saunders to hit into an inning-ending double play. The next inning, he gave up a 2-run homer to Ryan Radmanovich.