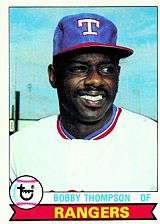 Bobby Thompson spent almost the entire 1978 season on the Texas Rangers' roster as a backup outfielder, hitting .225 in 64 games, but never played in a big league game any other year. The Rangers' starting outfielders that year included Bobby Bonds, Richie Zisk and Juan Beniquez. His minor league career had begun in 1972 after being a 19th-round selection out of high school in the amateur draft.

He was mainly a center fielder, showing good defensive skills but middling ability with the bat. He never displayed much power, with a career-best of 9 homers in 1976, and hit only 2 in his lone season in the big leagues. He finished with a career batting average of .273 in the minors. He was loaned to the Richmond Braves to begin the 1977 season, but hit only .215, played 6 games with the Toledo Mud Hens, hitting .167, then was returned to the Rangers' organization where he batted an uncharacteristic .333 in 49 games for the Tucson Toros the rest of the year. That earned him his shot in the major leagues the next season. After the 1978 season, the Rangers sold his contract to the Seattle Mariners, but he failed to make the team out of spring training in 1979 and presumably retired.