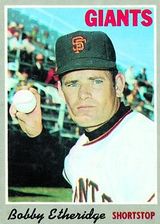 Bobby Etheridge played third base for the San Francisco Giants at a time when the competition was brutal. Earlier in the 1960's, Jim Ray Hart had forced Jim Davenport off of third base into a roving infield status, and when Etheridge joined the 1967 Giants to play 40 games (37 at third base), it was a team on which Hart got 88 games at third and Davenport got 63 games. Tito Fuentes played no games at all at third base, appearing in 129 games at second base, but two years later when Bobby returned to play 56 games for the 1969 Giants (39 at the hot corner), Fuentes was in 36 games at third, Davenport was in 104, Don Mason was in 21 and Hart was limited to three games at third base as he largely played outfield.

Bobby was born, and died, in Mississippi, and attended college there as well. After college, he joined the Giants' organization and stayed there from 1964-1969. During that period, his power was moderate (his high in home runs was 10) and sometimes he hit over .300 - in 1965 with the Fresno Giants he hit .329 with decent walks while in 1967 with the Phoenix Giants he batted .325 with a reasonable amount of walks. He came up to the big league team in July 1967.

A site about Mississippi State University sports [1] indicates that, unlike most people who go from community college to state university, Etheridge went the other way around. He was at Mississippi State in 1962-63 and then went to Mississippi Delta Community College which was a top baseball school at the time.

An obituary [2] states that after baseball he worked for Mississippi Marine as a supply coordinator.