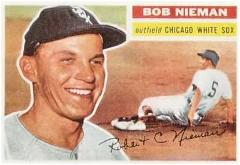 Bob Nieman was a very good hitter during his 12-year career in the major leagues with an Adjusted OPS of 132. He made quite a splash in his major league debut with home runs in his first two at bats on September 14, 1951 while playing for the St. Louis Browns. He was the first player to accomplish this feat. Nieman only twice hit under .280 (once at .276 and once at .263). His career .295 average was very good, and was buttressed by a very high .373 OBP and .474 SLG. Nieman's batting prowess was balanced by mediocre fielding as an outfielder and poor baserunning (only 10 stolen bases in 40 career attempts).