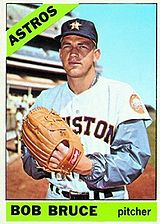 “As a member of the original Colt .45s team, Bob Bruce will always have a special place in the history of our organization, playing a significant role in several milestone moments. He was a popular player both on and off the field and helped solidify the Astros as a Major League franchise in the early years.” - Houston Astros, March 2017

Before 1953, Bob Bruce signed as an amateur free agent with the Detroit Tigers. He was sent to the Class D Wausau Timberjacks for seasoning and went 18-8 with a 3.20 ERA. 1954 found him with the Class B Durham Bulls, with a 13-8 record and a 3.42 ERA. It would take until 1959 before he got a chance to show his stuff in the major leagues. He first arrived with his hometown Tigers for a couple appearances late that season after leading the American Association in strikeouts with 177 for the Charleston Senators. He was back with Detroit in 1960, going 4-7 in 130 innings, and also in 1961 with a 1-2 record in 45 innings. On December 1st, Bruce, along with Manny Montejo, was traded to the Houston Colt 45s for Sam Jones.

Bob was part of the Colt 45s/Astros rotation for five seasons from 1962 to 1966. He logged his best year in 1964, going 15-9 with a 2.76 ERA, 9 complete games, 4 shutouts and pitching in the last game at Colt Stadium and the first game at the Astrodome. Following a tough luck, 3-13, 5.34 season in 1966, Bruce was traded once more, this time along with Dave Nicholson, to the Atlanta Braves for Hall of Famer Eddie Mathews, Arnold Umbach and Sandy Alomar. 1967 would be his last year in baseball, going 2-3 with the Atlanta team and finishing the season with the AAA Richmond Braves at 7-2 with a 1.87 ERA.

Bruce made his residence in San Antonio, where he was in real estate development and residential sales. He died in Plano in 2017.