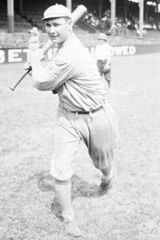 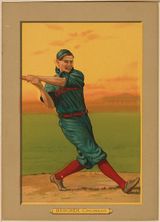 Bob Bescher, who played 11 seasons in the big leagues, led the National League in stolen bases four years in a row, from 1909 to 1912. He also led the league in runs scored in 1912 and walks in 1913. His speed was accomplished in spite of being one of the larger players of his day.

Bob was born, and died, in London, OH, although he attended high school in Indiana. Quite a few major leaguers were born in Ohio in 1884, of which only one had more at-bats than Bescher, that one being Burt Shotton. Bescher spent some time at Notre Dame and then Wittenberg University. He began playing minor league ball at age 22, spending three years playing for Ohio-based teams before coming to the majors with the Ohio-based Cincinnati Reds in September 1908. Except for 1917, his major league Adjusted OPS was always over 100 each season. When he stole 54 bases for the Reds in 1909, he set a franchise record for rookies that would last over 100 years, only broken by Billy Hamilton in 2014. None of Bob's major league teams ever went to the World Series (although some finished second in the league) so Bob never appeared in the Series.

In 1909, he played football, raising concern in Reds ownership that he would be injured. In 1914, he was again playing football, this time with a semi-pro team. After his major league days, Bob played in the minors through 1925. Bescher was killed in an automobile-train crash in 1942.