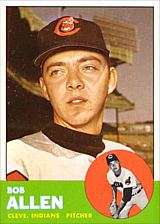 Before the 1956 season, Bob Allen was signed as an amateur free agent by the Cleveland Indians. He was assigned to the Nebraska State League (Short Season) North Platte Indians. The left-handed pitcher built a 7-5 record with a 4.11 ERA in his opening pro season. He spent the next four seasons, 1957 through 1960, in the minors before getting his chance with the major league Cleveland Indians. He amassed a 51-44 won-loss record with a 4.26 ERA during those years.

In the majors, he was used as a lefty specialist as a time when such usage was rare, as he only pitched 274 innings in 204 games, his rate of innings pitched per outing going steadily down after starting with a more usual 81 2/3 innings in 48 appearances as a rookie in 1961. He became a specialist after that, getting few decisions each year in spite of a fair number of games pitched. His final season, 1967, was the only one in which he had as many as ten decisions - 5 losses and 5 saves. The next five seasons, 1968 through 1972, Allen spent in Triple A. He was used as a spot starter and in short relief and finished his last years in professional baseball with a fine 21-6 record and 4.02 ERA.

Allen spent 17 years in pro baseball. He won 88 and lost 62 minor league contests and won 7 games while losing 12 in the majors.