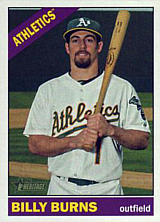 Diminutive speedster Billy Burns was drafted twice, first out of high school in Marietta, GA by the Atlanta Braves in the 16th round in 2008, and again by the Washington Nationals as a junior out of Mercer University in the 32nd round of the 2011 amateur draft. It seemed Burns was more interested in playing baseball than in completing his studies, as he immediately signed and, before long, was playing for the Auburn Doubledays of the New York-Penn League where he hit .262 in 32 games, scoring 21 runs and driving in 18. In 2012, Burns moved to the Hagerstown Suns of the South Atlantic League, where he played 113 games between center field and left field. He hit an excellent .322/.432/.382, scored 83 runs and stole 38 bases in 47 attempts. Billy continued to excel in 2013, starting the year in the Carolina League with the Potomac Nationals, where he played 91 games, and then earning a promotion to the Harrisburg Senators of the AA Eastern League for another 30 games. He hit .312 in the first stop, and .325 the second, for a combined line of .315/.425/.383 in 121 games. This time, he scored 96 runs and hit 9 triples, drew 72 walks and stole 74 bases while being caught only 7 times. Now a solid prospect as a lead-off hitter, on December 11th he was traded to the Oakland Athletics in return for veteran major league reliever Jerry Blevins, a sign that his days as a long-shot low-round draft choice were truly behind him.

Billy made his big league debut in the summer of 2014, working almost exclusively as a pinch runner and stealing 3 bags in 13 games while batting 1-for-6. He hit his first major league homer on May 24, 2015, when he led off a game against the Tampa Bay Rays by driving the first pitch from Erasmo Ramirez over the right field fence at Tropicana Field. He singled on the first pitch in his next at-bat, in the 3rd, and came around to score the A's second run, setting the tone for a 7-2 win. That year would be his lone as a regular, batting a respectable .294/.334/.392 and stealing 26 bags in 125 games. His bat cooled off considerably the next year, when he was dealt to the Kansas City Royals at the trading deadline for Brett Eibner. He played only 7 games in K.C. in 2017, kicking around the minors thereafter.