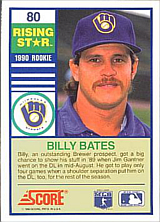 "Piniella sent Bates up to pinch-hit in the 10th. The little man promptly chopped a single off the concrete-hard turf and soon scored the winning run. In this old river town, Billy Bates was now a man for the ages, like Cookie Lavagetto, who hit that double off Bill Bevens, and Al Gionfriddo, who made that catch off DiMaggio, both in the 1947 Series for Brooklyn. Neither Lavagetto nor Gionfriddo ever played in the majors again. Nobody mentioned that to Billy Bates on Wednesday night." - George Vecsey

Billy Bates was drafted by the Milwaukee Brewers in the 4th round of the 1985 amateur draft out of the University of Texas. While at Texas, he was named MVP of the 1984 National Baseball Congress World Series playing for the Grand Rapids Sullivans. A speedy infielder, Billy made his debut with Milwaukee on August 17, 1989 and recorded his first hit on August 20 against Mike Smithson of the Boston Red Sox. On July 9, 1990, he was traded to the Cincinnati Reds, with Glenn Braggs, for Ron Robinson and Bob Sebra.

To Reds fans, Bates is best remembered for an infamous foot race against a cheetah from the Cincinnati Zoo. Looking for an extra late season promotion, the Reds decided to have a foot race before a 1990 home game. The Reds, who were not tremendously concerned with Bates being mauled, staged the race across the outfield. Bates won the race, but only after his hat came off his head and the cheetah mistook it for food. That year, the Reds went wire-to-wire and won the World Series. Billy scored the winning run in Game 2 of the World Series, but never appeared in a major league game after that.