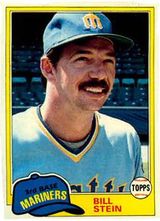 Bill Stein was a valuable and versatile player for several big league teams. He hit .267 and played every position except pitcher, catcher, and center field. He played from 1972 to 1985 with the St. Louis Cardinals, Chicago White Sox, Seattle Mariners, and Texas Rangers. Stein had limited time as a starter in the big leagues, mainly the two years after the Mariners made him their third pick in the 1976 expansion draft, in 1977 and 1978. He started at third base and batted 5th on Opening Day for that first Mariners team.

Stein set the American League record for most consecutive pinch hits at 7 with the Rangers in 1981. For his career Stein was a .282 hitter as a pinch-hitter, above his overall .267 mark.

In 1989, Stein was a player/coach for the Orlando Juice of the Senior Professional Baseball Association. He batted .257 in 34 games.

Stein managed in the New York Mets organization from 1988 to 1990; he distinguished himself as the winningest manager in the Mets organization in 1990. He then managed the 1991 Bend Bucks and 1992 Clinton Giants. He was the hitting coach for the 1993 Shreveport Captains. In 1994, he managed a team in Tyler, TX, then retired from baseball. He moved to North Padre Island, Texas, where he conducted private lessons.