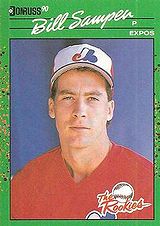 Pitcher Bill Sampen was signed as a 12th round pick in the 1985 amateur draft by the Pittsburgh Pirates and scout Gene Baker. He was drafted by the Montreal Expos from the Pirates in the 1989 Rule V Draft. He spent the entire 1990 season with the Expos and ended up as the team's leader in wins, going 2-7, 2.99 in 59 games. He was used mainly as a middle reliever and was lucky enough to vulture plenty of wins in that role. He had a couple other productive seasons with the Expos: in 1991, he went 9-5, 4.00 as a swingman for the last-place team, then in 1992, he was 1-4, but with a 3.13 ERA after going back to middle relief full time. Late that season, on August 29th, he was traded to the Kansas City Royals along with P Chris Haney in return for 3B Sean Berry and P Archie Corbin. He continued to pitch well for the Royals late in 1992 but, his ERA ballooned the next two seasons, and he was out of the majors for good by the middle of May, 1994.

His son Caleb has pitched professionally.