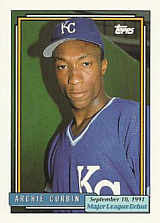 Archie played in the organizations of nine different teams and also was in independent ball for a couple of years, spending parts of eight seasons in Triple A. He was primarily a starter at the beginning and end of his career, working in relief in between.