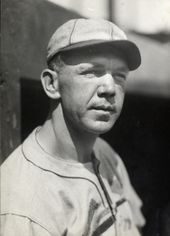 A twelve-year major leaguer, he was a member of the Gas House Gang and was the top pitcher in the 1931 World Series, winning a couple of games and saving the final game of the Series. In 39 2/3 innings of World Series pitching, spread out over four different Series, Hallahan had an ERA of 1.36. His St. Louis Cardinals won three of the four Series.

He was a World War II veteran and worked for G.A.F. Corporation after his playing days.