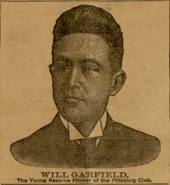 Bill was born in Sheffield, OH and attended Oberlin College in the same state. He was the third player from Oberlin to come to the majors, after Fleet Walker and Welday Walker. He played minor league ball with Toledo while still in college.

Garfield pitched 4 games for the Pittsburgh Alleghenys in 1889 and then 9 for the Cleveland Spiders in 1890. Afterwards he pitched some more seasons in the minors, mostly in the Midwest.

He is, through 2010, the only major leaguer with the last name Garfield.