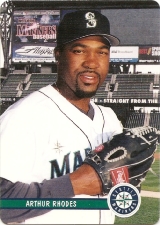 Arthur Rhodes was a left-handed relief pitcher, but he was not a LOOGY. A career middle reliever, he retired with the all-time record for holds, with 231, until passed by Tony Watson in 2021. The caveat - and it is a big one - is that this total is only from 1999 onwards, when Major League Baseball started to compile totals for holds. Since he actually reached the majors in 1991, his total according to Baseball-Reference is 254.

On September 13, 2005, Rhodes left the Cleveland Indians for the remainder of the season on a personal leave granted by manager Eric Wedge. He made his first All-Star team in 2020, by which time he was in his 19th season and had turned 40 a few months earlier.

Rhodes is the brother of minor league pitcher Ricky Rhodes.